The state of Nebraska is where the old and new worlds come together. A vast expanse of land traversed by a great water body, the state exudes a striking aura that is unique to it. Colored in varied shades of nature, history and evolution, life in Nebraska has a charm of its own that leaves a mark on those who experience it.

Set amid the landscape of the Great Plains, Nebraska forms a part of the midwestern United States of America. It is bounded by South Dakota to the north, Iowa and Missouri to the east, Wyoming and Colorado to the west, and Kansas to the south. Nebraska’s eastern border is defined by the huge Missouri River.

Rivers play an important part in Nebraska life and settlement, with most of the population living close to the Missouri and Platte rivers. In fact, the state’s name is derived from an Otoe Indian term that means “flat water,” referring to the Platte River. Nebraska lies entirely within the Great Plains, a major geographic region of the United States, and encompasses part of the Till Plains.

With its distinctive topography, the state is subject to extreme temperatures. Hot winds from the southwest region elevate temperatures during the summer. Cold winds during the winter can take temperatures below zero degrees Fahrenheit. Nebraska also experiences blizzards and tornadoes.

With its rolling Sandhills, prairies, grasslands, rivers and small lakes, there’s no doubt that Nebraska makes a picturesque destination.

History and Population of Nebraska

Nebraska was admitted to the U.S. as a state on March 1, 1867, but the land had been home to a range of people for thousands of years before that. The rich history of Nebraska is dominated by the various indigenous groups living within its present-day borders.

Before Europeans settled in Nebraska, life in Nebraska consisted of the historic cultures of Native American tribes. These tribes called this land their home for centuries. The western part of the state was occupied by nomadic groups called the Cheyenne and the Lakota Sioux. They moved often and lived in tepees.

By contrast, the Omaha, Pawnee, and Otoe peoples sheltered themselves under strong, permanent earth lodges made of sod. These native tribes occupied the eastern region of Nebraska.

The Arrival of the Europeans

When European explorers and traders entered the region, both France and Spain wanted to conquer it. The first Europeans set foot in Nebraska in the 1500s. In 1541, a Spanish explorer named Francisco de Coronado came to Nebraska and claimed it for Spain.

In 1682, Frenchman Robert Cavellier took the land for France. Over the next few years, Spain, France, and even Britain fought over the land.

Annexation by the United States of America

A large area of the land located west of the Mississippi River was controlled by the French in the 1800s. In 1803, under the Louisiana Purchase, the United States government bought that land, including Nebraska, from the French.

Nebraska – From a Territory to a State

The first army post was established in the region of Nebraska in 1819. It was called Fort Atkinson, and was built on the western side of the Missouri River. A small fur trading post that came to be known as Bellevue was also built near the Missouri River. It is Nebraska’s first and oldest permanent settlement.

In 1854, thanks to the Kansas-Nebraska Act, the Nebraska Territory was created. Life in Nebraska flourished, with more and more people moving into the region and settling there. There was an expansion of infrastructure across the country, which made it convenient for people to travel to and from the state. On March 1, 1867, Nebraska became the 37th state. Although Omaha had been the territorial capital, the state government was moved to Lancaster. The city of Lancaster was later named Lincoln in honor of Abraham Lincoln, the sixteenth president of the U.S.

Nebraska has evolved over the years. From modern-day activities and comforts to hints of the laid-back Nebraska lifestyle of ancient times, the state has a lot to offer its residents and visitors.

Located in the Great Plains, Nebraska has a lot of breathtaking views to offer. The state boasts open plains that stretch for miles and miles, natural rock formations, towering dunes, and several scenic spots.

Those who love the hustle and bustle of city life will enjoy the offerings of Lincoln and Omaha. The cowboy culture and rich heritage of these cities add to an experience that is going to stay with you forever! Are you wondering where can you find all this?

Nebraska Life Magazine is your guide to everything you need to know. We’ve put together a list of places to visit in Nebraska to make your life in Nebraska truly memorable!

A popular scenic spot, Chimney Rock is one of the Nebraska famous landmarks. The geological formation, which looks like a rising smokestack, can be traced back millions of years. In the early 19th century, people traveling west through the Great Plains took their bearings from this awe-inspiring natural sandstone formation. The rock spire also carries significance for Native Americans and Mormons.

Chimney Rock towers more than 400 feet over the prairie. Located in the North Platte River Valley, this historic site will give you a feel for what the state was like in earlier times, since the surrounding landscape looks much like it did before. Today, the site houses a museum and a visitor center.

Are you a car enthusiast? Do vintage car models fascinate you? Then Carhenge is one of the must-see places to visit in Nebraska for you! 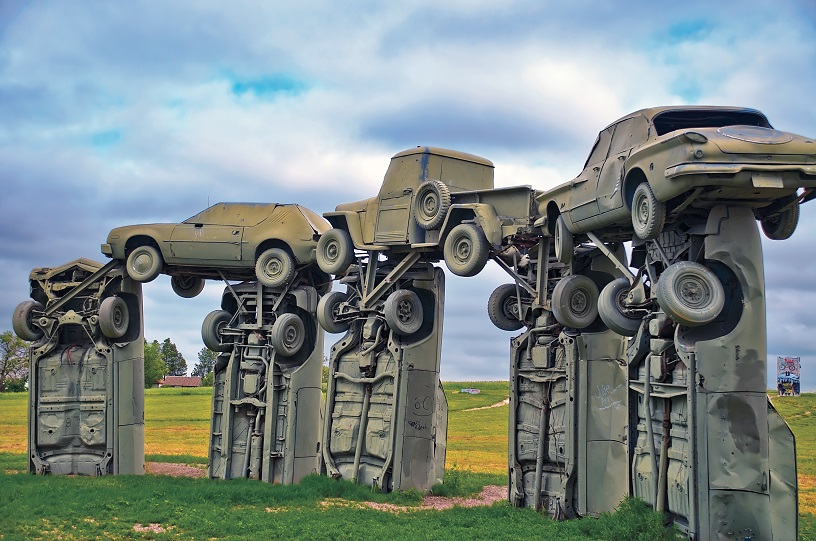 An imitation of the iconic landmark of Stonehenge, this unique monument incorporates cars instead of huge rocks. A collection of vintage cars made in the United States is stacked and arranged in unusual ways amid the grasslands of the Great Plains. They are painted gray to resemble the circle of standing stones located miles away in Britain. In addition to this attraction, there are several other automobile artworks at the site.

Located in the Sandhills, the attraction appeals to car lovers, artists, and people passing by. This one-of-a-kind Nebraska famous landmark is surely worth a stop!

Set in northeast and north-central Nebraska,, this is the perfect place to experience how lonely cowboys traversed the Great Plains during the early days. The Cowboy Trail follows an old railway line and traverses hundreds of bridges. The view from the Valentine Bridge attracts particular interest. 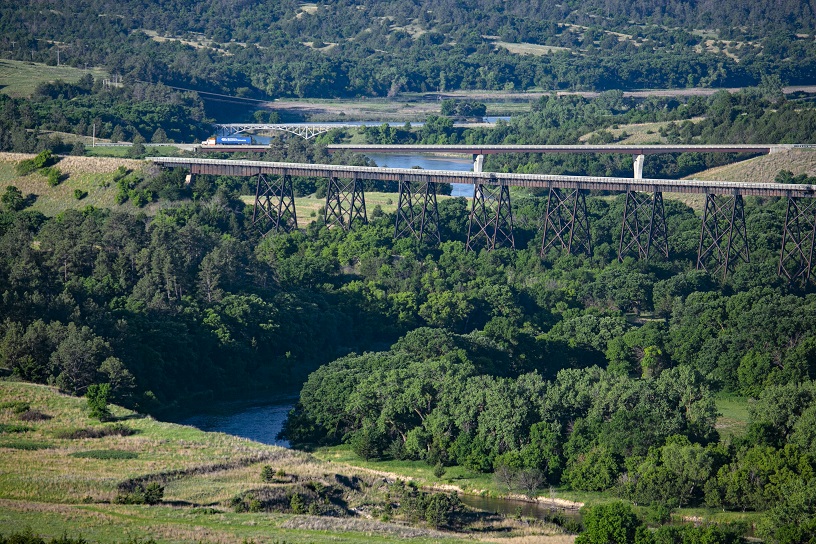 Today, the trail is a 192-mile recreational route. You can hike along the gravel and crushed limestone path, cycle all the way, or ride on horseback in true cowboy style under the blue skies. Don’t forget to check the weather forecast beforehand and carry your camera!

Visitors, artists, and photographers from around the world travel places to witness the migrations of birds and animals. Surely, you must have seen a picture or two of such events in magazines of Nebraska or elsewhere, or even online! 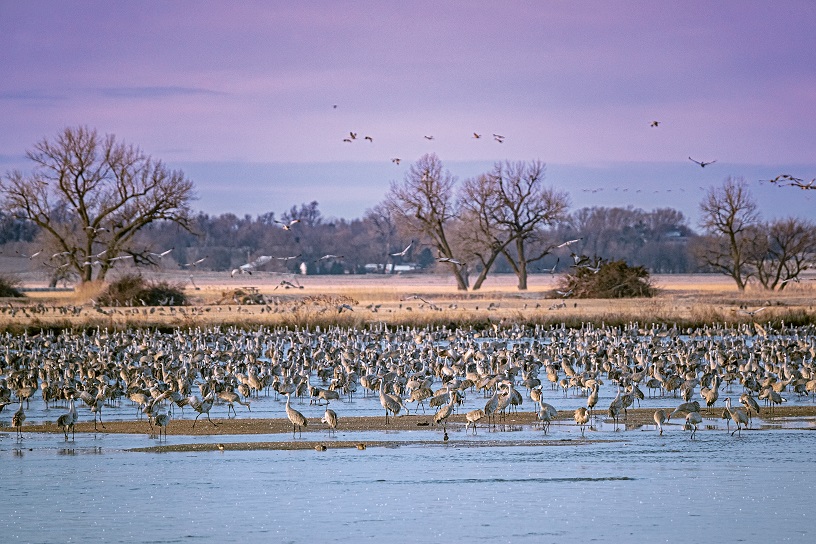 Every spring, cranes fly north, and in the fall, they migrate south. The sandhill crane migration is a well-known event in the Platte River valley. With around 80% of these sandhill cranes flying together, it is a sight to behold, making the valley a must on your list of best places to visit in Nebraska. Show off your photography and videography skills by capturing the breathtaking view!

Another Nebraska famous landmark, this natural structure was also used as a marker by people living in or traveling through the region in the mid-19th century. Established as a national monument in 1919, the site is a collection of several bluffs that tower over the landscape, visible from far off across the prairie. Winding roads lead to the area, providing you with opportunities to hike and admire the mesmerizing views of the bluffs from multiple angles. 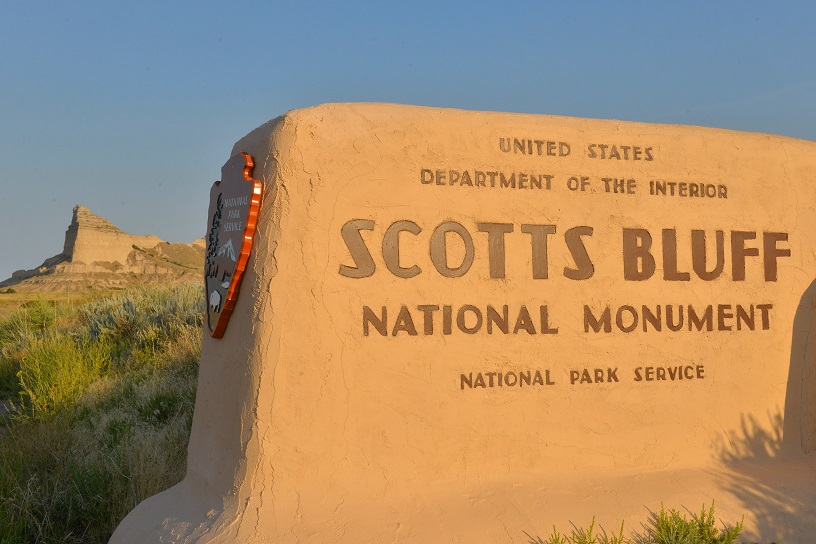 Nebraska is home to one of the world’s biggest railroad yards. The bustling Bailey Yard has hundreds of trains and thousands of rail cars enter it each day. 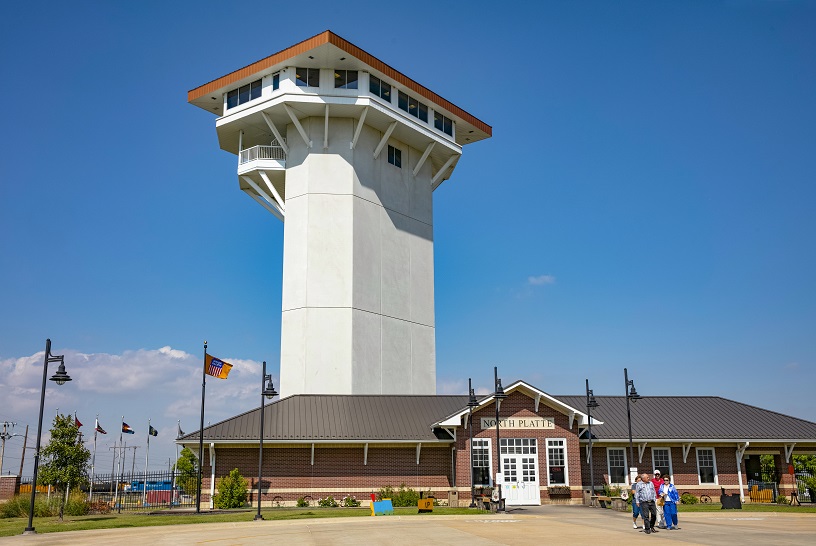 Golden Spike Tower is one of the best places to visit in Nebraska if you want to get a great view of the Bailey Yard. From the top of the eight-story tower, visitors can enjoy views of the yard and the Platte River valley. If you’re in the mood for a souvenir, the visitor center at the base of the tower is the place to go!

If you’re looking for the city buzz in Nebraska, Lincoln is the place to be. Busy streets, bustling cafes and restaurants, historical buildings, markets, events, and nightlife – Lincoln has it all and more. When in Lincoln, you can’t miss the capitol building. Go on a guided tour to enjoy a stunning view of the city from the observation deck of the building. 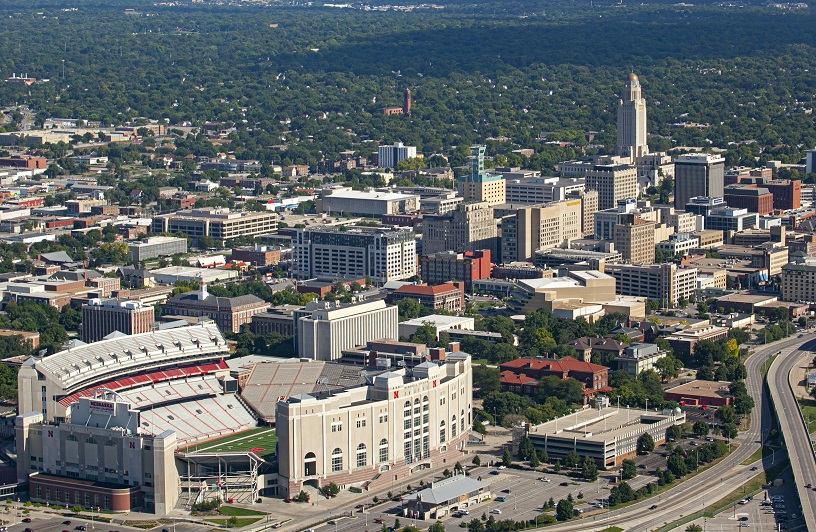 If you’re into football, a college game is a must-watch here. Nebraska is also called the Cornhusker State, after the University of Nebraska’s team, the Cornhuskers.

One of the state’s most populated cities, Omaha is full of life in Nebraska! Omaha offers old-world charm, culture, and hospitality. 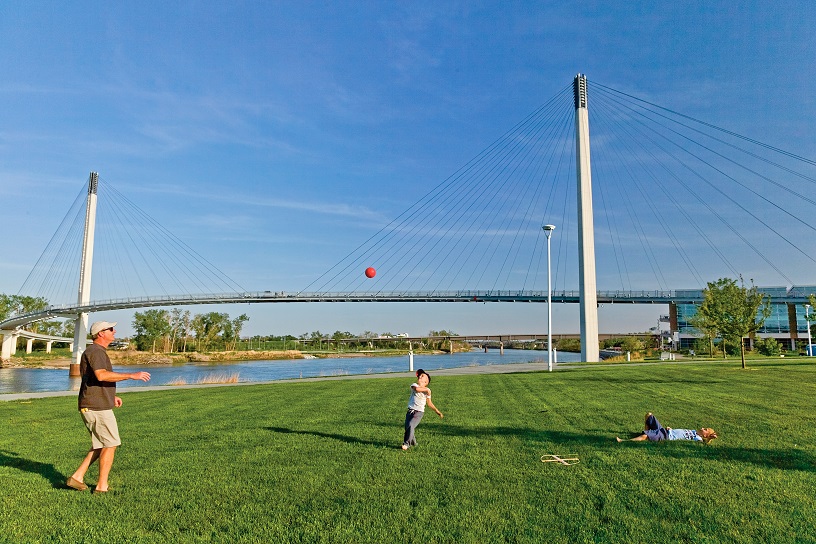 Visit the old market to get a sense of what life in Nebraska was like long ago. You’ll find streets made of brick and horse-drawn carriages to transport you from one place to another. For culture enthusiasts, there’s the Joslyn Art Museum, where you can view world-class collections.

There’s much to do in the evenings in Omaha, as the city bustles with nightclubs and music venues.

If you’re on Interstate 80, close to the city of Kearney, you’ll come across a colorful structure called the Archway. This striking monument honors the adventurous travelers who passed through this area and are dedicated to their contributions to building the nation. It has a museum that will take you back in time with displays of ancient Nebraska life, sod houses, a fun trail blaze, and more! 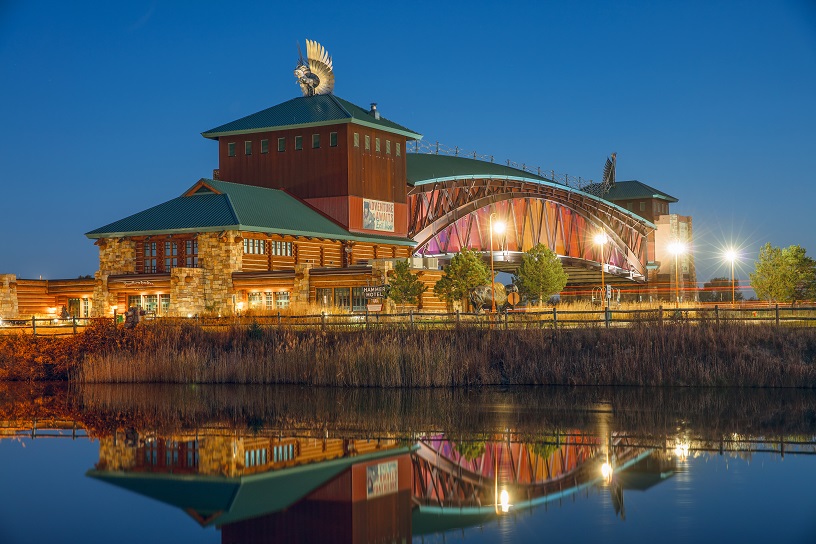 If you enjoy learning about space, aircraft, and aviation technology, then this is a great place to explore. 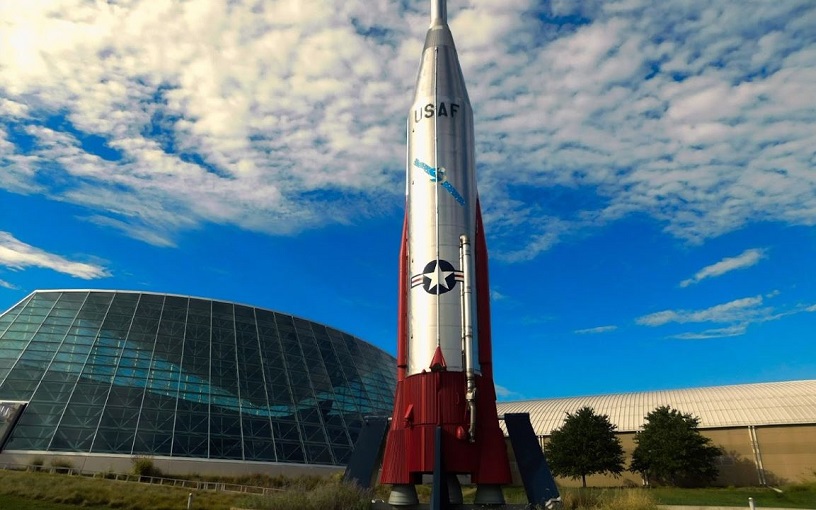 The museum houses a vast collection of airplanes, spacecraft, and other exhibits that are frequently updated for all aviation enthusiasts. What’s more, you can enjoy astronomy shows and rides to experience the world beyond, which is not visible to the naked eye!

Nebraska is a mix of busy cities and towns that exude an old-world, relaxed charm. Omaha and Lincoln are two of the most developed cities in the state. Other towns, like Papillion, Bellevue, La Vista, Grand Island, Norfolk, North Platte, Hastings, Scottsbluff and Kearney, are also great places for those who seek a more relaxed lifestyle. Shed the stress and make the choice to live in Nebraska.

There are many things you can do on a fun-filled journey to Nebraska. From hiking in the bluffs and cycling along the Cowboy Trail to livestock water tank rides and nightlife in Omaha or Lincoln, there’s so much to do in Nebraska. Get a Magazine to guide you through the state!

Absolutely! Nebraskans have great affection for the city, which was the capital of Nebraska Territory. It’s a population center and an interesting place where you can experience everything from history to the progressive charm of life in Nebraska.

They are called Nebraskans or Cornhuskers.

Nebraska is a safe state with low crime rates. Nebraskans are known around the U.S. as being very friendly people.

Due to the low cost of living in the state, there are several counties in Nebraska that boast of being the wealthiest. Sarpy, Washington, and Lancaster top the list.

12 fun things to do across the state of Nebraska if you travel with kids, and where to stay