The funds changed the addresses of various “hot wallet” users to those considered to be under North Korean control, and everything, of course, remained written on the blockchain. After the cryptocurrencies were stolen, the process of “laundering” them began, to cover their tracks and eventually turn them into classic currencies. 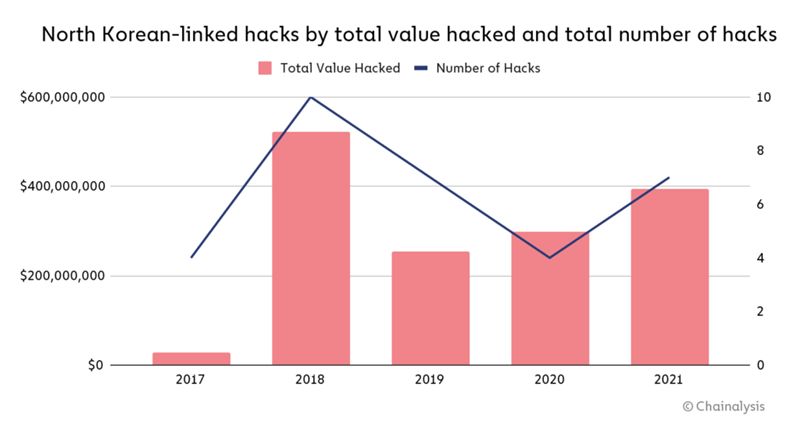 Over the past year, there has been an increase in hacking activity in North Korea, analysts say. According to the published data, their record year was 2018, when in ten attacks about half a billion dollars were stolen, and then for two years there was a relative decline, both in the number of attacks and in the amount of stolen cryptocurrencies.

Last year, Kim Jong-un’s hackers concentrated on ether, which accounts for 58% of stolen coins, and the share of bitcoin targeted by hackers fell to about 20%. The rest are ERC-20 tokens and other altcoins. The use of so-called “mixers”, software that conceals transactions by dragging them through thousands of addresses, in order to cover the trail of money, has also increased.

Analysts at Chainanalysis conclude that all their analysis has confirmed that North Korea is a country that supports cryptocurrency-related crime, and to a large extent, through its hacker groups, the most famous of which is called Lazarus. For this reason, they point to this country as “a very pronounced and constant threat to the crypto industry.”

However, they also point out that blockchain transparency is a great advantage, as crime can be more easily detected and analyzed, and the path of stolen assets can be tracked – so that, if the opportunity arises, the funds can be frozen and identify criminals.

Is the controversial actress the one to blame for the divorce of Jason Momoa and Lisa Bonet?