The Volkswagen bestseller, however, finished last year in first place in Europe, ahead of the Peugeot 208 and Dacia Sandero.

The year behind us has been extremely turbulent when it comes to selling new cars.

The chip shortage crisis has taken its toll, with many manufacturers delivering fewer cars to customers even compared to 2020, when due to the pandemic, many plants were temporarily shut down and many customers decided to postpone buying a new vehicle for better days.

When it comes to selling certain models, the battle for the top during 2021 was extremely uncertain. Unlike the previous few decades, when VW Golf convincingly dominated, now several models are vying for first place by the end of the year.

However, according to data collected by Jato Dynamics, Golf finished in 2021 with a close result. We say close, although the difference between the first and second on the list was almost 10,000 vehicles, because the Volkswagen bestseller in previous years has become accustomed to leaving its rivals behind for about 100,000 units.

In second place is the Peugeot 208, which reached the addresses of 196,869 customers, while the third place belongs to Dacia Sandero with 196,792 units sold.

The differences between the top five on the list have never been smaller, with the fourth Renault Clio ending the year with 196,243 vehicles delivered and the fifth Peugeot 2008 selling 194,653 units.

It is also noticeable that the Nissan Qashqai is not among the top 25, which managed to be among the ten best-selling cars in Europe years ago.

As for the German premium trio, only the Mercedes A-Class and BMW 3 Series are present, in the last two positions.

See the complete list of the 25 best-selling models in 2021: 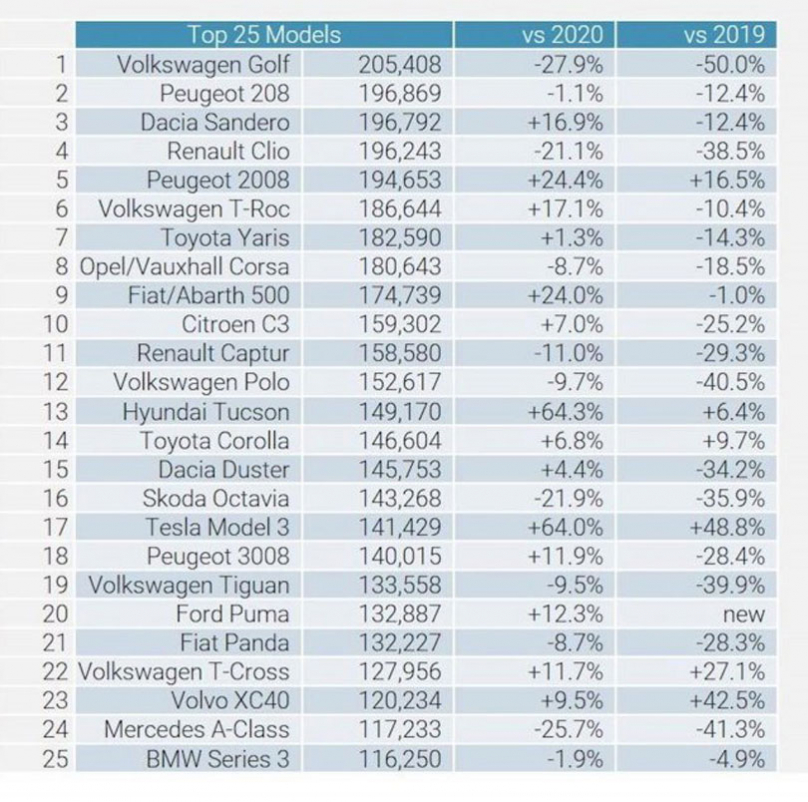 The Kawasaki hybrid motorcycle is getting closer to production